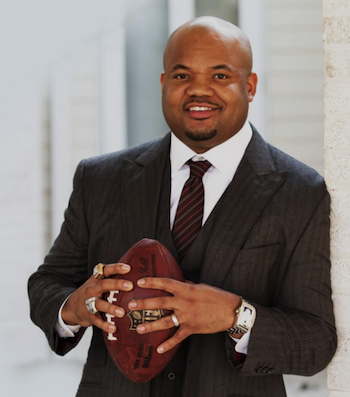 Transform your team with a championship framework for success taught by a Super Champion, High-Performance Coach, and Corporate CEO.

"Gary was sensational from beginning to end- his raw, authentic story will move you emotionally in a powerful way. His message around legacy will stop you in your tracks as you consider the life you are living. Gary's message of hope amidst life's trials and setback will leave your audience inspired and ready to take action!"
Dave NeffCEO EDGE
"Gary Brackett did not disappoint. His message was filled with encouragement, inspiration, and great humor. His passion for leadership and continuous growth is illustrated through exceptional story telling suitable for any type of audience. Our team continues to speak of that day weeks after the event."
Brandon BishopMarket Manager Coca-Cola Bottling Co.
"Gary very seamlessly hit on all the major themes important to our company with real examples from his life. Gary has a unique talent for weaving humor and inspiration into his messages on leadership, teamwork and personal development. Our company certainly benefited from having him speak."
Brian SullivanCOO Merchants Capital
Previous
Next

Describe yourself in one word: Charged

Prior to founding the Brackett Restaurant Group and Gary Brackett’s Impact Foundation, Gary Lawrence Brackett played linebacker for the Indianapolis Colts of the National Football League. Born and raised in Glassboro, New Jersey, Brackett is a small-town boy at heart. He attended Glassboro High School where he was a two-time All-South Jersey selection; a two-time All-Group I; and a two-time All-Tri-County Conference choice.

A walk-on to the Rutgers University football team, he earned a full scholarship during his second year and never looked back. By the time he left, he’d serve as Defensive Captain, led the team in tackles and earned MVP and Big East all-conference honors. After a stellar senior year, however, Gary went undrafted in the 2003 NFL Draft. Not to be refused, however, Gary earned his way onto the Indianapolis Colts’ roster as a free agent.

Once he retired from the Colts in 2010, Brackett engaged in sports commentating, something he still enjoys today, but soon turned his focus to entrepreneurship. In 2014, Gary graduated from the Accelerated Executive MBA program at George Washington University. Afterwards, he decided to focus on the restaurant space and establish his own company. Gary currently acts as President/CEO of Brackett Restaurant Group which boasts brands such as Indy’s #1 Neighborhood Sports Bar, the Stacked Pickle. The company boasts 10 locations & has won numerous awards for its excellence in service & delectable dishes. Brackett Restaurant Group owns several other casual dining brands as well as a full-service catering company.

For his service to the community, Brackett has been presented with numerous awards. In 2009, he was presented with the Arthur S.Arkush Humanitarian Award. Every year, this award is bestowed upon an NFL player “whose contributions to the community and charitable organizations are especially outstanding.” For his success as the owner of Brackett Restaurant Group, he was awarded the Madame CJ Walker Legacy Award in 2015 and was named to the Indianapolis Business Journal’s 2016 Class of 40 Under 40. In 2018, Gary was awarded the Senator Carolyn E. Mosby “Above & Beyond” Award by the Indiana Black Expo. Most recently, Gary was awarded the National Urban League Young Professionals award for his business success and civic engagement. He has been featured in Entrepreneur, the Indianapolis Star, Indianapolis Business Journal, and many other publications.

He Lives in Carmel, IN with his wife Dr. Ragan Brackett, and his three children Gabrielle, Gary Jr, and Georgia

Fueling Greatness:
Being a Champion in Your Organization
Being a Great Teammate:
Lead from Wherever You Are
Championship Framework:
Reaching High Performance in Entrepreneurship
Mastering Your Day:
The Championship Morning