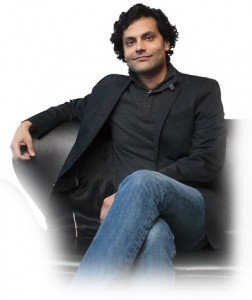 Ravi offers compelling keynote and lecture services that are relevant to millennials and baby boomers around the world. He draws upon his personal story to inspire audiences to take meaningful action toward making greater contributions and achieving greater success. Ravi’s marketing savvy equips business leaders with tools to attract and retain new talent and customers, and his rock star experience motivates young people to pursue excellence in their personal and professional lives. He has attracted a loyal client base of some of the most respected brands & institutions worldwide.

Ravi Hutheesing (Rah-vee Hut-tee-sing) is a keynote speaker, published writer, and singer-songwriter. He has influenced thousands of people in the Americas, Europe, and Asia through presentations on entrepreneurship in the arts. Also a pilot, he is a top aviation motivational speaker and industry futurist. Globally, Ravi advocates to eradicate third-world poverty through education, and most recently the United States Department of State made him an Embassy Speaker initially bringing him to Russia to promote cultural ties and mutual understanding.

Ravi’s worldwide visibility skyrocketed as the guitarist for Hanson—the top-selling band in the world around the turn of the millennium. He has performed on the stages of the Tonight Show, Today Show, Good Morning America, Saturday Night Live, Madison Square Garden, Superdome, and the White House; penned over a hundred articles for major magazines; authored Dancin’ with Hanson published by Simon & Schuster, and written four music instructional DVDs on TrueFire. He also released two CDs independently and multiple singles on iTunes.

While learning to fly, The Raviator discovered that pilots have a strong interest in music—49.7% play an instrument—and started promoting his musicianship within aviation. He performs concerts at air shows, endorses both music and aviation companies interested in attracting pilots, developed a signature model folding guitar for aviators with small airplanes, and in addition to helping the industry recruit millennial talent, speaks on pilot hearing loss prevention since he meets more hearing impaired pilots than musicians.

Born into the “Wall Street” branch of a political family, Ravi is the first American born member of the Nehru-Gandhi family—India’s political dynasty who created and governed the world’s largest democracy for over 40 years. Despite the obvious career opportunities, he chose to pursue his own ambitions while embracing the legacy of his heritage.

Learn more about Ravi the Raviator